Mark Trezona (in memory and celebration) 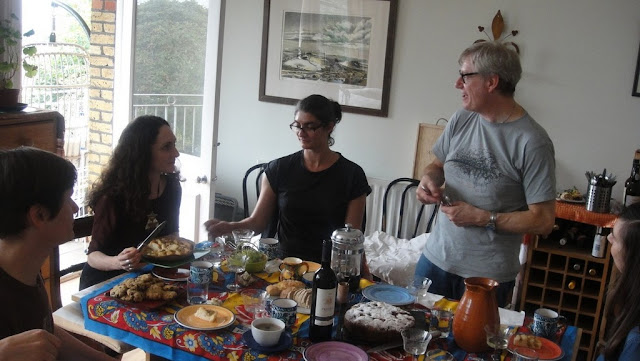 photograph: the end of a lunch party -- colourful table with a cake, bottle of wine, and various plates, jugs, glasses, cafetiere. there are five people around the table, and they look relaxed and engaged in animated conversation. the lunch party takes place in a home, with a door open to a bright balcony behind the table, and pictures on the walls. the people in this photo are: Theron Schmidt, Lucille Acevedo-Jones, Helena Suárez, Mark Trezona (who hosted this lunch and is standing up in the photo), and Sheila Ghelani.


My dear friend Mark Trezona died suddenly at the end of last year. His was not the only death that arrived with shock and sadness during 2021. Indeed, the news arrived at the end of a year that brought grief on so many levels, repeatedly. But there arrived with his death something else – a feeling that propelled me to write this.

I wondered what this particular feeling of loss was, how to articulate it. My partner suggested that it was the feeling of losing chosen family. And I think that’s something of it. Mark was indeed part of my family, and an important part. But there was something more to this loss: Mark, I later realised, was also part of my lineage – one of those people who quietly and generously offered me the tools I needed to survive, as a freelancer, as a listener, as a human.

Though I haven’t seen Mark for a number of years, those tools he offered still serve me every single day. I carry them with me now, and know them as mine. So I’m writing this as a way to celebrate Mark, to mourn his loss, and to acknowledge the strength of energetic resonance that remains with me from the many gifts he offered. And more broadly, I am also writing this to acknowledge what a great difference we can make for each other, to encourage each of you to know how much you make a difference, and to celebrate those people in all of our lives who gently have our back even when they might seem far away.

Here are some things I can tell you about my experience of Mark.


He cared about care. He took the time to host beautiful lunches as part of our working relationship, recognising that making and sharing food should be at the heart of how we interact as humans. We joked during those years that one of the foundations of our working practice was cake (but we were also very serious about it!)

He didn’t care if his success looked like other successes. He really was prepared to do things differently, and to lead with his heart. Sometimes wildly impractical (and unafraid of figuring out what was needed to make the impractical doable!) but above all committed to being present and generous with those around him. He believed that humans could be happy, and he worked to share this belief in a wide variety of contexts, always open to learning and growing as he went.

He taught me some really big truths about boundaries and generosity. He taught me that there is a version of selfishness that is generous, that is about inviting each person to take responsibility not just to show up, but to show up with honesty about where they are at and what they need – and that knowing when you can’t show up is a core part of this work. He helped me understand the flip side to this too, that there is a version of generosity that is selfish, where we spread ourselves thin, keep showing up without having the energy or resources to follow through – and this version of generosity is pervasive, and can be dangerous. Together, and later separately, we worked to create models of professional practice based on these truths, inviting care and listening into the heart of every meeting we had.

Once, when I was in the height of striving for ‘career success’ as an artist, I remember asking Mark about a piece of writing he was working on. I wanted to know whether it was finished yet, as I was keen to read it. He said something that I found extraordinary. He said that he hadn’t managed to finish it yet, in spite of repeated deadlines and a desire to get it done, and that he was trying really hard to pay attention to his own reluctance. At the time, I was surprised and slightly puzzled by what he said, but now it makes a lot of sense to me. It is, among other things, a counter narrative to the vicious cycles of pseudo-efficiency that dominate many of our worlds, distracting us from the things we care about. Sometimes, we are procrastinating because our bodies are guiding us with wisdom. Listening in, we can find what is needed. It’s a far kinder and more interesting way to approach procrastination than the usual punitive approach that many of us take on by default.

These are just a few things that I learnt through my relationship with Mark – a relationship that was clearly and explicitly always about friendship as well as work. He helped me trust my instinct that work relationships could also be heart relationships. And at the core of this was his ability to listen, to really listen, to whoever he was with.

I remember talking to Mark about loss some years ago, right before we closed the performance company we ran together. It was during a sweet, intimate gathering that marked the closing of the company but was also a ritual for endings more generally.

During the evening, Mark confessed to me that he didn’t usually acknowledge endings. He said he preferred to keep living, to keep moving. He didn’t like saying goodbye. And in the moment that we were having that conversation, he said that something shifted for him. He was emotional thinking about the ways in which he had avoided goodbyes in his life.

I wanted to end with this story because it is poignant to me. I wanted to end by acknowledging that Mark found loss difficult to deal with, and he recognised this. And in honour of this moment, I want to invite us to be with our losses, with the feelings of holding on or letting go, and the feelings of moving on or avoidance, acknowledging that these are all ways of being with our grief.